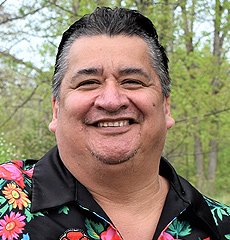 R. Stacey Laforme is the elected Chief of the Mississaugas of the Credit First Nation (MCFN). Born and raised on MCFN, Chief Laforme has served his community for over twenty years being first elected to council in 1999.

He is very active throughout MCFN’s Treaty Lands and Territory, which encompasses 3.9 million acres of Southern Ontario, not only as a Chief, but as a notable storyteller, poet and published author. Chief Laforme has recently been appointed as honorary senior fellow for Massey College, joining the Duke of Edinburg and the Chancellor of Oxford as only the third person awarded the highest honor the college can bestow. In 2018, De dwa da dehs nye (Aboriginal Health Centre) awarded Chief R. Stacey Laforme the Walter Cooke Wisdom Keeper Award in recognition of one’s capacity to exemplify significant and continuous service to our community by demonstrating integrity, generosity of spirit, humility, courage, collaboration, “The Good Mind”, and traditional ways of knowing and being.

Gimaa has published “Living in the Tall Grass: Poems on Reconciliation”